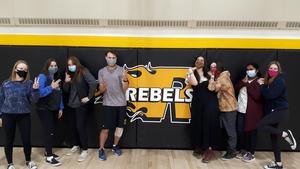 Campaign raises over $14,000 for the Alberta Cancer Foundation

Holy Redeemer’s March 4A Cure campaign returned for its 11th year this past March. Even though the fundraising campaign was happening in the middle of a pandemic, the students did not let it deter them from fundraising an incredible $14,000+!

“This year we set a reasonable goal of $5000,” says March 4A Cure Organizer Mike Bachinsky. “Usually, we try to set a higher goal, however due to all of the COVID protocols we could only fundraise with two events.”

“Each year we organize a silent auction on one night during the month,” says Bachinsky who added that trying to do that this year would have been impossible. “So, we decided to hold an online fundraiser through Patterson’s Parts Supply.”

The March 4A Cure group collected a number of items from local businesses, all of them donated, and put them up on the auction site. Then they scheduled one week in March for the auction to run. What happened next was nothing short of incredible. “The whole thing just blew up online,” says Bachinsky. “We saw tons of bids throughout the week. Everyone seemed to love it!” Bachinsky added that many people who were ‘stuck at home’ because of the pandemic sat by their computers watching their bids throughout the week. And when the dust settled, the group raised an incredible $14,770 smashing their original goal.

This year’s fundraising effort will be added to the 11-year total of $115,860. All of the money raised goes to the Alberta Cancer Foundation. On top of this, this year’s money will be donated in the memories of Normande Tannas and Shandy Reichenbacher.

This year’s March 4A Cure event would not have been made possible without the amazing donations from the Edson business community, the outstanding group of student volunteers, and of course, Patterson’s Parts Supply who were instrumental in organizing the online auction.

One more person who should receive tremendous praise is Bachinsky, who has led the March 4A Cure campaign for the past eleven years ever since he joined the teaching staff at HRH. He was even recently awarded the 2021 Edson FCSS Volunteer Award for Leadership.

“Mr. Bachinsky is a true professional,” says Principal Betty Churchill. “His dedication to the March 4A Cure campaign shows his commitment to our strong Catholic ideals of helping those in need. We are so proud to have him at HRH.”

This year is also the swan song for a number of grade 12 students have helped with the campaign for as many as the past six years. Fear not, as there is a great group of younger students ready to take hold of the reigns.

With that, the books are now closed on another March 4A Cure campaign. Everyone looks forward to next year as they set an even bigger fundraising goal.