HRH to Perform "A Christmas Carol" 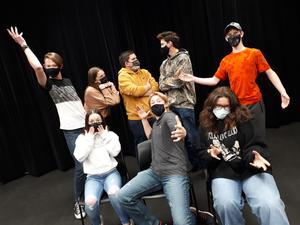 “We entered into this year with near normal conditions,” says Drama Teacher Peter Taylor, who commented the protocols that were in place last year prevented any presentations from taking place. “The conditions this year have allowed us to continue with rehearsals and put a production together for our community.”

With this in mind, the Drama Department announced they will be performing A Christmas Carol. “We actually performed this show back in 2007,” says Taylor who remarked that some of the cast was not even born when the school last performed the show.

Some elements will be the same, however there will be many things that will change and be improved on. “I’d like to think we’ve learned a thing or two in the past 14 years,” says Taylor.

A Christmas Carol is written by Charles Dickens and tells the story of Ebenezer Scrooge who absolutely despises Christmas, charities and people. Only when he is visited by an old friend in Jacob Marley does he realize he might have a second chance to change his ways. From there, he is visited by three spirits: the past, the present and things yet to come.

Playing the role of Scrooge will be grade 12 students Jesse Cesario and Ethan Toner. Both young men have been a part of the Drama Program since grade 7 and will end their grade school acting careers with a lead role. “I can’t ask two better young actors to take on this role,” says Taylor, who added that the role of Scrooge does not leave the stage during the entire two hour performance.

Rounding out some of the supporting roles are Hayden Roth as Marley, Cassie Pilon and Hayley Pardy as Christmas Past, Katie Blue as Christmas Present, Cody Van Beek as Bob Cratchit, and Dylan Watson as Fred Holywell.

The show is set to perform from December 1st to 4th.

Now of course, there are many questions circulating on how HRH will perform the show given the new provincial protocols in place. “Right now, we’re dealing with the present. We’re two and half months away from performing. A lot can change between now and then,” says Taylor. “That said, every scenario that we have ends with us performing in some way. I know our students want this to happen, they deserve this to happen. And I know they do what it takes so Edson gets the production they deserve.”

With that, rehearsals are underway. Stay tuned to the HRH social media pages for updates, and in the meantime, be sure to congratulate the over 45 grade 7 to 12 students on taking part what will be another amazing production.