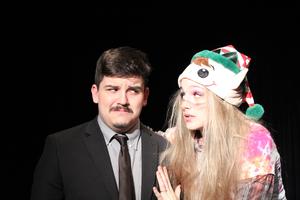 After two years of the Drama Festival being cancelled due to the COVID pandemic, Holy Redeemer returned to the Zone Drama Festival in a very big way winning a total of six awards and seven honourable mentions.

“This has been a very different journey for us,” says Drama Teacher Peter Taylor. “The Festival Committee only decided in March to host a Festival, meaning we had very little time to put some shows together. Lucky for us here at HRH, our students really stepped up to the plate and committed to putting together some amazing shows.”

Both shows were showcased for one night only and one performance only at HRH on April 27th. Over 80 people attended the event, cramming into the Drama Room at HRH. There they watched the students shine in their performances.

The senior high play, entitled The Zero Sum Mind, told the story of a post-apocalyptic future where people begin to forget things as they learn new things. Grade 12 student Jesse Cesario played the lead role as he was introduced to this new idea and soon succumbs to its effects. Grade 12 student Katie Blue crazily leads him through this horrid new world in an attempt to survive. Other characters played by Shaelynn Dozorec, Rayna Matthews, Cassie Pilon, Ethan Toner and Cody Van Beek have already felt the damaging effects and have already “gone off the deep end” (which was demonstrated by their outlandish set and costumes).

The junior high play, entitled Cuttin’ Line, was about a young family trapped in the longest line ever to get into heaven after dying. The mother, played by drama newcomer Shayla Frotten, gets very upset as she and her family learn the rules of the line through another dead person, played by Nolan Taylor, and the terrifying Lorna, played by Neha Paul. The mom’s kids, played by Maya Dalueg and Robyn Hussey, try to calm the mother down, even though they have to get used to the idea that they now possess bodies of people much older than they were when they were alive. Beyond that, there was a very comedic moment when finding out the dog, played by Malaynie Steffler, joined them for the ride. Meanwhile the neverending cast of dead people in the background added some additional comedy.

After the showcase, both plays headed to their respective Festivals that happened to both be in Westlock. The junior highs performed on April 28th and won the crowd and quite a few awards. These included the Best Backstage Teamwork Award to the crew of Monica Villasor, Lexuz Morana and Shannon Bouchard. All three also won Honourable Mentions for Best Lighting, Best Backstage Work and Best Sound respectively The entire cast won Honourable Mention for Best Ensemble Cast. The play also won two Outstanding Achievement Awards for Acting to Frotten and Taylor.

The senior highs performed on April 29th and wrapped up the Festival with a strong performance and a standing ovation. The show was so impressive it won Runner Up for Best Production. It also took down awards for Best Actor to Cesario, and Best Technical Work to the crew of Haley Squire, Abby Bolones, Kaye Saldua, April Aclan and Torrie Pilon. It also won Honourable Mentions for Best Stage Manager to Squire, Best Costumes, and Best Choreography.

With that, HRH once again shows their outstanding work and that they have a top-tier Drama Program. “I’m really lucky to have such outstanding students who are so dedicated to theatre,” says Taylor. “These shows were only developed in a matter of weeks, and they came together through the student’s work. I am so proud of all of them.”

And the Drama Program shows no signs of slowing down as they now turn their attention to their main stage production of Village of Idiots, which is scheduled to be performed outside at the Pavilion in Centennial Park from June 1st to 4th. Tickets are now on sale and can be purchased through the Holy Redeemer website, holyredeemerhigh.ca.