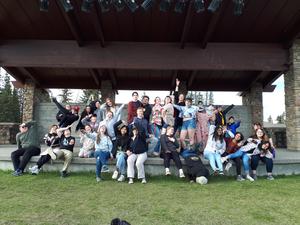 'Village of Idiots' Takes the Stage, June 1st to 4th

Are you ready to see some live theatre? Well, the wait is over as the Holy Redeemer Drama Department is now selling tickets for their next main stage production. And for the first time ever in Edson, it will be performed outside at the Pavilion in Centennial Park!

“We wanted to do something different, something very unique, and perhaps a little daring,” says Drama Teacher Peter Taylor. “Performing outside brings so many challenges, but when you have an outstanding cast and crew like we do, everyone is up for the challenge.”

The production, entitled Village of Idiots, will perform five public performances from June 1st to 4th. The showtimes will be 7 pm on 1st and 2nd, 5 pm and 8pm on the 3rd, and 7 pm on the 4th.

When asked why the Drama Department has decided to perform a play outside, the answer was simple. “Over the last two years we have seen so many indoor events and activities cancelled due to the COVID pandemic,” says Taylor. “By performing outside, we were guaranteeing our production. But now restrictions have been lifted, this is more to do something different and unique. Plus, this show is the perfect play to perform outside.”

Village of Idiots is a hilarious Canadian play that showcases many stories relating to Jewish folklore. The main story revolves around the small town of Chelm (in what is now Poland) in the 1880s and villagers known as Chelmnik’s who are simple-minded, but have huge hearts. They are joined by an outsider named Yosef, played by grade 12 student Jesse Cesario, who carries with him a secret. What ensues is some very hilarious antics combined with a story with a whole lot of heart.

Forty grade 7 to 12 students will be taking part in the show. Rounding out the major roles will be Dylan Watson as the Rabbi, Aisha Bartolay as Miriam, Cassie Pilon as Nina, and grade 12 students Ethan Toner and Katie Blue as the hilarious husband and wife duo of Zalman and Zlateh.

Another new element with this production is that tickets can be purchased online via holyredeemerhigh.ca. They are $10 with audiences encouraged to bring their own chairs. Individuals can also purchase tickets at the door. “We have had questions about what if it rains,” says Taylor. “Lucky enough, we do have the Red Brick booked as a backup. But, we really want the outside production to happen.”

So, be sure to get your tickets soon as only 150 spots will be available for each performance.

And, now the cast and crew return to rehearsals as they prepare to make history.