Rebels Football is Back Bigger Than Ever 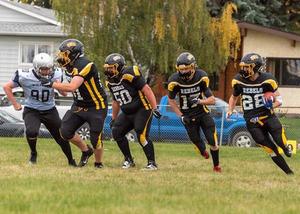 The Holy Redeemer Rebels Football team is back, and they are hungry for another great season.

Fresh off their provincial third place win, the Rebels squad now has an impressive 24 student athletes who will take the field in the 2022 season.

“We are very excited for the start of this season and we’re looking forward to pick up where we left off,” says Head Coach Mike Bachinsky. The athletes are so ready that they have been practicing even before school even started. “These young men and one young woman came in countless hours in the early hours of the day in August to train and get ready for what I think will be our most successful season yet.”

The 2022 season will see HRH play a total of seven league games and one exhibition game. After that the hope is that the Rebels find themselves in a solid playoff position as they work towards a potential provincial championship. “I’m looking forward to seeing the new talent on the team,” says Bachinsky, remarking that there are a number of newcomers to the sport. “It was great to see so much interest from our students.”

Not only are there players interested in playing, but the number of students, staff and community members that have stepped up to support the team is incredible. “It’s so amazing to see a large number of people coming out to cheer on these athletes each and every game,” says Bachinsky. “Not only that, but the community always steps up to sponsor our team to help make playing football something that everyone can afford.”

So if you are looking for the most experienced football team in town, look no further than the field behind HRH. The dates for this year’s home games are September 21st, September 29th, October 13th, and October 20th. The September kick-off times will be 4:30 pm, while the October games will see a 4 pm kick-off.

With that, the Rebels look forward to another successful year on the field. And perhaps the most inspiring words for the upcoming season come from grade 12 student and Co-Captain Aidan Was, “We’re back bigger, stronger, faster and better than ever before. So come on out and cheer on the Rebels!”